Vaccination required. Click to read about Health and Safety Guidelines for your visit

We couldn't be more excited to open our doors again. We are taking the following steps to support safe attendance during your visit.

RECOMMENDED! Very Funny! ★★★Director Jeremy Wechsler’s production grounds the flightier aspects of the play in a Chicago-style reality. Eno is a very fascinating writer. If you like marital comedies and hate them both at the same time, this is your show.Chris Jones (no relation), Chicago Tribune

Unsettles the heart... Eno’s gift is his ability to find the heartbreak and fear, as well as the quirky comedy in all this. Director Jeremy Wechsler and his cast have tapped into the deftly conjured, fragmented, offbeat rhythms of Eno’s characters with impressive skill.Hedy Weiss, WTTW 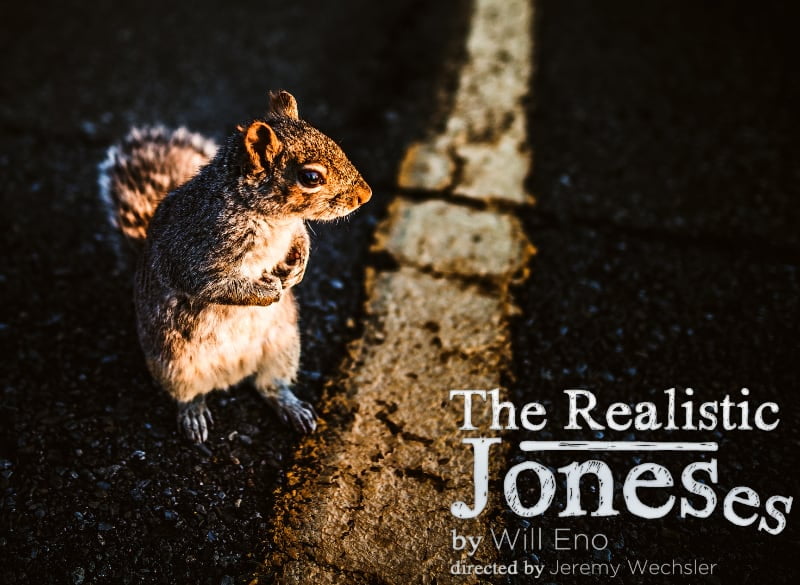 a co-production with Shattered Globe Theatre

Meet Bob and Jennifer Jones. And their new neighbors, John and Pony Jones. These two couples have more in common than you might suspect in Will Eno’s funny, quirky and compassionate look at how marriage might be both everything and not nearly enough.

How can the small—sometimes banal—beauty and mystery of lives spent together hope to measure up against the certainty of eventual loss? Join the Joneses: Time is short but there are gift certificates to enjoy, tiny fireworks to light and another perfect summer evening to take for granted.

Read more about the plot (some spoilers)...

Bob and Jennifer Jones are sitting on their porch one summer night. Bob is a little withdrawn, and Jennifer is getting frustrated. They are interrupted by the appearance of their new neighbors, John and Pony Joneses, who have moved into a nearby house. Pony is excited about their new town and to meet the new neighbors. Their couples are chatting amiably until they discover a dead squirrel. Pony, shaken, asks John to take her home.

Over the next few weeks, as the new neighbors bond, secrets are revealed. Bob is ill with an obscure (and ultimately fatal) disease. Jennifer is trying to cope, but is feeling isolated and lonely. John and Pony are happy together, but John is also keeping a secret. He and Jennifer share an unexpected moment of intimacy at the grocery store, which both of them keep secret.

Bob's physical and mental difficulties are starting to pile up and he is refusing to track any medical details, preferring Jennifer handle all of that. John's own problem starts to reveal itself, but Pony doesn't want to know. She feels like she will be inadequate to whatever problem John is concealing. She is terrified that she will fail John and herself. Pony confides these fears to Bob and they ggrid-x closer.

"Did you not hear me? I want ALL the plot (and the spoilers)"

The Realistic Joneses is a comic work about marriage, infidelity, communication and end of life.

John has the same extremely rare disease as Bob: Harriman Leavey Syndrome, which causes a gradual but inevitable breakdown of one's ability to communicate, followed by a host of debilitiating physical issues. It is incurable. John has moved to the town because the syndrome's discoverer, Dr. Leavey is resident at the local hospital and is the only resource for its treatment.

After John collapses one night, Jennifer takes care of him. She keeps his confidence. Meanwhile, Bob and Pony have a brief affair, united by their mutual desire to not talk about what's happening. John is jealous, but avoids confronting either of them. Jennifer is similarly angry with Bob but cannot abandon him.

With difficulty, the couples each confront their partners and try and build new bridges and/or repair old ones. They acknowledge both the inadequacies of their parternships and recognize that the marriage is what they have, for as long as they have it. Finally, all the Joneses finally go to a nice dinner. That evening, they are witness to the death of another HLS victim. Shaken, they return to Bob and Jennifer's backyard, where they share a summer night under the stars, waiting for the future.

Chockful of unexpected humor, it's about life itself. All four actors shine, HB Ward inhabiting his role so convincingly that it didn’t seem like acting. You’ll want to keep up with these Joneses, who have something essential to say to all of us.Leanne Star, Splash Magazine

HIGHLY RECOMMENDED! Right from the get go, it is the fast-moving wit of playwright Will Eno’s pen that charms, showcasing the infinite varieties of how we deal with the terrors of the grim reaper’s arrival. Most of all, it’s the craving for marriage and connection to help us cope that Eno’s script, the superb cast and direction bring to life. Amy Munice, Picture This Post

Check out the video...

★★★1/2 I didn’t find a single false note struck during the evening, not one moment when the play turns silly or willfully obscure. The play weaves an almost otherworldly spell. One rarely comes into the presence of a production that so effectively meshes the talents of the director, actors, playwright, and designers. Dan Zeff, Chicagoland Theater Reviews

Lighthearted but poignant. We are watching people who could be us dealing with difficult times as well as they can. It’s nothing earth-shattering, perhaps. Or, perhaps, in its very simplicity, it is.Karen Topham, Chicago on Stage

In director Jeremy Wechsler’s capable hands, the wry humor and fragility of the situation shines through to make “The Realistic Joneses” an inventively staged, touching and uproariously funny story of aging and endless possibilitiesEd Tracey, Picks in Six